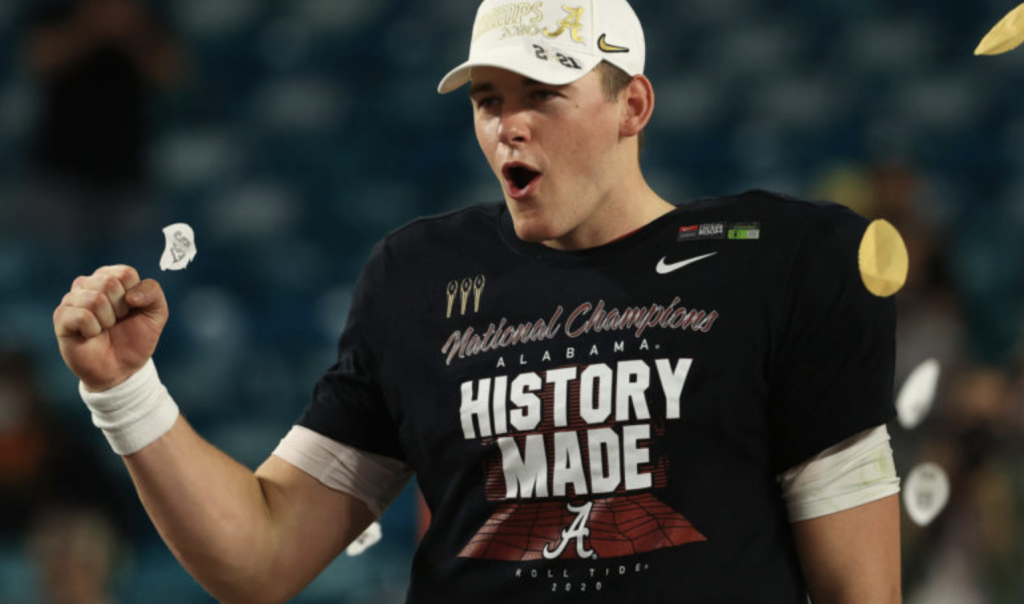 I read an article in the Wall Street Journal today about the preponderance of cheating in American school systems. Texas A&M University had a 50% increase in cheating allegations in the fall from a year earlier. A university official said one incident involving 193 students self-reporting academic misconduct to receive lighter punishment after faculty members caught on. The University of Pennsylvania saw cheating case investigations grow 71% in the 2019-20 academic year, school data shows. There is a cottage industry of services that will do homework, complete term papers, and even write doctoral dissertations for students. The practice of cheating has become acceptable to the point that one student filed a complaint with the Better Business Bureau against a company that didn’t supply the promised quality of work.

There is never a shortage of students looking for a shortcut. Then there is Mac Jones. I became a fan of Mac Jones as I heard more about his story in the lead-up to the butt-whupping that Alabama put on my Ohio State Buckeyes (52-24) in the 2021 College Football Championship Game. Jones was the quarterback for the Crimson Tide in his senior season after sitting for most of his career behind two All-American quarterbacks, Jalen Hurts and Tua Tagovailoa. Instead of “cheating” the process, Jones did what used to be the norm, he went to work on his game.

In an interview with the Boston Herald, a good friend, Mac Hereford, said, “I don’t know if a single coach or anyone else spent as much time as Mac in the facility.” Evaluating practice, evaluating the last game, the team we were about to play, he just studied like crazy.” Jones’ film study became so detailed he could foretell when a linebacker would drop into coverage or blitz pre-snap based on whether he was resting his hands lightly on his thigh pads (drop) or heavily on his knees (blitz). Jones and Hereford would get together for late-night throwing drills. Jones would text Hereford around 11 p.m. on Fridays and Saturdays to come to throw. Jones usually started without him, firing balls into a stationary net all by himself. Forbidden from using team equipment during off-hours, Jones always threw in his high school helmet and shoulder pads to simulate game conditions.

During one off-season, Jones told former high school teammate Jack Lundgren — who played linebacker at Navy and was now applying to the Navy SEALs — how he should improve. They decided to bolster Jones’ play under pressure and incorporated “box breathing,” a concentration technique Lundgren learned from SEAL training, into Alabama’s offseason program. First, they would exhaust Jones physically with his scripted workouts.

Then the real work began: running plays, making reads, and throwing on the move while maintaining his breathing. “The body wants to shut down and the mind wants to quit, but you still need to get those reps,” Lundgren said. “Do it right, do it again.”

As I see the dues paid by Mac Jones, I recall what comic Steve Martin said in his autobiography Born Standing Up to be “so good they can’t ignore you.”

I watch from the left-field bleachers as club players jump to a different club to be on a “1’s” team instead of working on their game to earn a position with their current club. The collegiate transfer portal is bursting at the seams with players treating their collegiate programs like another year of club volleyball. Somehow, embracing the process of working hard and competing for a spot isn’t quite as fashionable. Similar to the academic side, why do the work if I can buy a result?

A tip of the hat to the Mac Jones’ “out there.” In the long run, there will be a payoff. The payoff might not come in the form of a national championship, but you’ll like what you see when you look in the mirror.