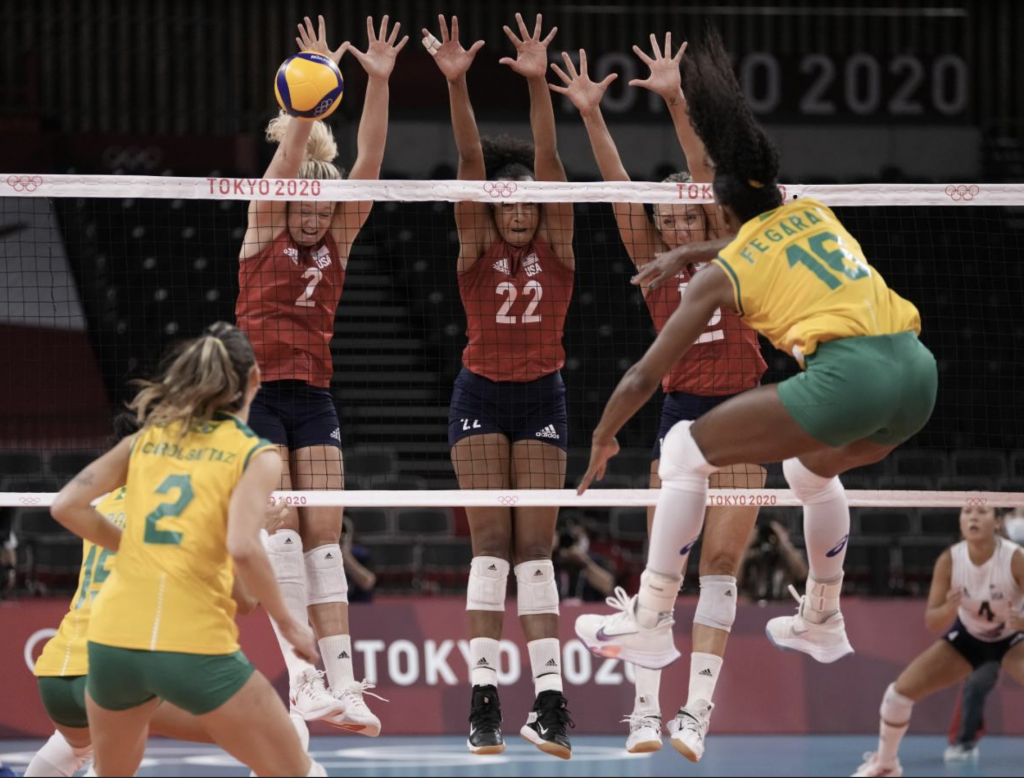 Unless there is a galactic championship out there, the Olympics demonstrates volleyball at the highest level. As the Olympics wind down, I find myself bleary-eyed from watching as many matches and events as possible. I have the utmost respect for these athletes that push the edges of their talents.

Although these are the best players in the world, are there any aspects of the game as it’s played at the highest level a coach might adapt to a high school team? You may not be able to copy the entire skillset of the best players, but can you take aspects of what you see and adapt them to your players?

First, a few general observations. I have to say, I found the men’s matches more intriguing and better played than the women’s matches. On the men’s side, top players played well, the matches were hard-fought, competitive and the standard of play was extremely high. I found the women’s matches to be somewhat inconsistent as to the level of play. The two most consistent women’s teams relative to their level of play, Brazil and the USA, found their way to the finals. There is no doubt a correlation between consistency of play and making it to the gold medal match. It is fitting that this consistency was rewarded. Being good all the time is very difficult. The other trait of both Brazil and the USA women’s teams is they don’t depend on one player to score all the points. Both teams have an excellent offensive balance which makes them harder to defend. Competing with the USA in the gold medal match was an uphill climb for Brazil as the USA was superior in talent and execution.

I was ecstatic that the referees were calling throws on open-hand third contacts where the hand/ball contact was deemed too long. Supposedly, this officiating mandate was ordered by the FIVB. The reasoning was the throw, or as it is termed, the “jam,” is “this type of attack is not good for the game.” I heartily applaud this point of emphasis. In the recent NCAA Women’s Championship, the number of throws on attacks that were not called was insufferable. I hope this rule enforcement extends to collegiate play.

I’ve listed below a few items that stood out to me that might be implemented into a collegiate or age-group program.

After watching the France-ROC match this morning, I saw a couple of skills by France that a high school coach might consider incorporating into their training session. I was impressed with how effective the out-of-system offense was for France. When I say effective, I mean they scored when the first contact took them out-of-system. Very rarely did they provide ROC with a freeball or a non-attack. Regardless of where the first contact placed the ball, the second contact allowed a quality attack. More often than not, the result was a kill. It was apparent they prioritized this aspect of their transition offense. All the players were adept at setting or using their forearms to present a hittable ball to an attacker.

The second item that hit me was the tactics used with their serve. Yes, they made many errors, but I liked how accurate they were with short serves that were both well disguised and accurate. The dilemma for the passers is facing a high-velocity jump serve mixed in with a serve with a similar trajectory dropping in front of them.

The takeaway for the high school coach is two-fold. Budget training time on your out-of-system offense because most teams are out-of-system 50% of the time. You want to make every effort to score in those out-of-system situations. Work with the hitters on taking quality approaches, especially the last two steps, and avoid giving the opponent a free ball. Work with all the players in being accurate with the second contact, either with hands or forearms, placing the ball in an area where the hitter can be effective. The second takeaway, when I see younger teams attempt to serve short, the result is a high trajectory moonball that is easy for the passers to recognize. The trajectory for both a deep and short serve should be similar. Work with your servers on both types of serves and keep the trajectory as flat as possible.

The Backrow Attack Should be a Component of High School Play

It is essential to keep the point scorers on the court. In both the men’s and women’s play at the Olympics, the best teams will attack out of the backrow. There is no doubt the men’s side uses this attack more often than the women. However, the women’s teams also use this tactic with success. I especially like how Brazil uses the backrow attack out of the “pipe” position. Attacking out of the middle back puts a lot of pressure on the outside blockers. Should they assist the middle blocker with the pipe or focus on their outside attacker? Of course, to be proficient at this attack, coaches need to keep your best attacker on the floor in the backrow, along with investing time to develop proficiency in both the setting and attacking components. The main issue with young teams is they only set the backrow player in out-of-system situations. When setting the pipe attack, try to make it part of your in-system offense and make the set as fast as your hitters can efficiently attack.

Former USA Women’s Coach, Arie Selinger, believed that a lower set was easier to attack than a higher set. I have found this to be accurate at all levels. In both the men’s and women’s play at the Olympics, the tempo to the outside and pipe attackers was fast. The tempo remained pretty quick even when the set was coming from 10′-13′ off the net. Traditionally, when the setter moves off the net, they tend to launch the ball higher. Changing the tempos on sets is a challenge for the attacker and often results in inconsistent approach timing. Unless completely out-of-system, maintain the offensive tempo as much as possible.

How fast a high school program can run their offense will depend on the setter’s skills. I encourage coaches to move their offense in the direction of a faster tempo. When putting this into your offense, go slowly with the change of tempo. It will take time for your players to adjust. The other component of Selinger’s statement is that he felt the faster the offense, the better the defense! Your players will get used to playing fast, which translates to faster movements and quicker reads on the defensive side.

Not every play is perfect. It was not unusual for the attacker when going from defense to attack not to have a perfect 4-step approach. Fast transition plays happened often at the Olympics. The hitters would only have two-step approaches. But they would use those two steps to accelerate to the point of attack and create an effective offense. The last two steps of a spike approach are the most critical. High school coaches should work with their attackers on making sure the last two steps of a hitting approach are dynamic, even when they do not have their standard attack approach footwork. Doing so will help your team develop more powerful attacks, and fewer freeballs to the opponent.

The Block Can Be Your Friend

Too many coaches emphasize to their players to avoid the block. I would encourage all coaches to emphasize to their attackers the importance of hitting off the edges of the block. Using the blocker’s hands in this manner forces the defense to cover more court. I often use a drill to emphasize the component of attacking. I place two antennas about 4′ apart with two blockers between the antennas. The hitter must create offense by attacking between the antennas, off the blocker’s hands, and scoring. Drills of this nature will force the hitter to locate and use the hands of the blocker.

I’m sure coaches watching these great players at the Olympics saw other items that impressed them. The ones mentioned above stood out to me that might apply to younger ages.

Lastly, like everyone, the number of poorly timed commercials was maddening. However, the trade-off was being able to watch the best in the world perform!

Posted in Blog, Coaching and tagged Olympics
← Keys for Great Practices!Organize Your Practice for Learning →