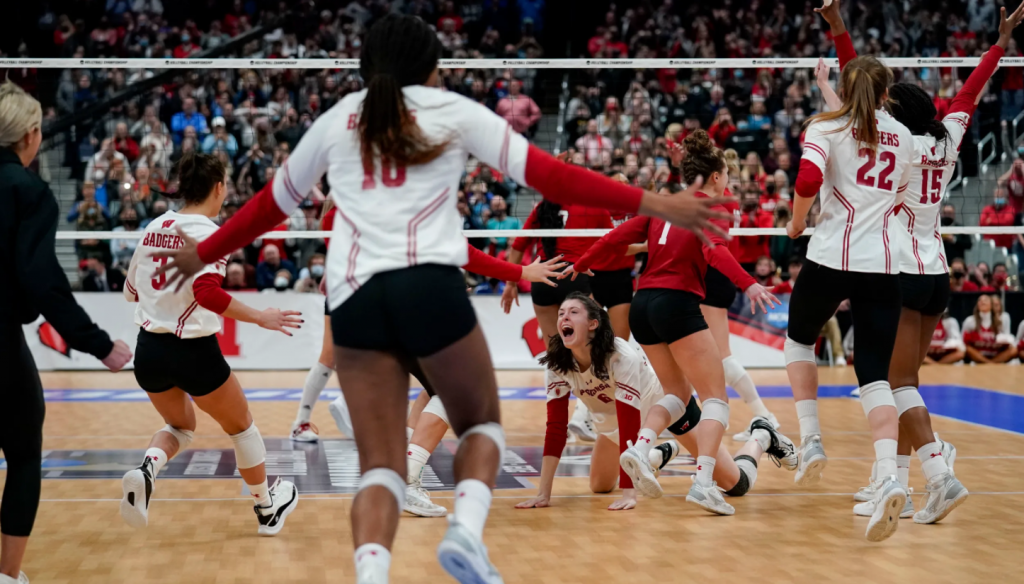 Along with 18,000 other volleyball fans, I enjoyed watching the Division 1 Women’s National Championship match last Saturday night. I can’t imagine a match where two teams fought harder and gave all the effort they possessed each time the referee blew the whistle. Some fans felt it was the best national championship match in history. Not to rain on that parade of post-match emotions, but I somewhat disagree. One could make the case that this match might be the closest, most exciting, and most competitive of championships matches, but it was not the most well played.

Relative to the most well played, it might be the championship match last spring with Kentucky and Texas. Texas hit 33% as a team in that match, only to be bettered by Kentucky’s 34%. The two teams combined for 57 errors (Texas-29, Kentucky-28). In the four-set match, that averages to about seven errors per set. That number of low errors is outstanding at any level! By comparison, in the match last Saturday, the two teams combined for 110 errors (Wisconsin-51, Nebraska 59). That’s over ten errors per set for each team. Nebraska hit at a 14% efficiency, while Wisconsin attached at an 18% efficiency. Strictly from a low-error and efficient offensive execution, last spring’s championship match had better execution.

What was the reason for the high error rate? One can only guess. The abilities of both teams placed a lot of pressure on the opponent. I was sitting in the end zone, and I can attest to the quality of the serve. Both teams have good defenders and blockers that forced hitters to hit shots that might be considered low percentage. Sometimes an ignored aspect of the game is quality block touches. Both teams had high-quality touches from their block allowing attacks to be successfully defended in the backcourt. Defensively, both teams worked very hard to keep the ball off the floor. I recall several saves by Nebraska that were excellent, both from an effort and execution standpoint, and took away kills from the Wisconsin offense.

With both teams playing at a high error rate, what allowed Wisconsin to win the match?

In the AVCA Pre-Convention Seminar that I presented with Mick Haley, I emphasized the importance of the backrow attack, along with suggestions to successfully implement this attack into an offense. On cue, one of the most impactful performances for Wisconsin was Jade Demps ringing up 12 kills, mainly from the backrow. More often than not, she attacked against a block that was focused on the front row attackers. That’s not a slam on Nebraska’s blocking system. With Demps attacking from various areas of the backcourt, Nebraska had three blockers defending four attackers. This certainly placed a lot of pressure on the Nebraska block. What was great about the Wisconsin backrow attack was it was a part of an in-system offensive plan. Too many teams primarily set the backrow when they are marginally out of their system. If you combine Demps’ backrow offense with her front-row counterpart, Anna Smrek, you had twenty-six kills and only five errors. That’s pretty good for one position.

The most discernable difference, along with the backrow attack success mentioned above, was Wisconsin’s blocking performance. Wisconsin out-blocked Nebraska 24-10. I can see two factors in this number. One, Wisconsin’s block is tall and talented. A hidden factor might be Nebraska’s absence of an in-system backrow attack. The lack of a back-row threat allowed Wisconsin’s block to focus on the outside hitters from Nebraska. The ensuing result was Nebraska’s three outsides hitting a combined 10% efficiency. Teams won’t win many matches, with the outsides hitting 10%. Even with that low number, Nebraska was in a position to win, primarily due to the high error rate by Wisconsin.

Sometimes fans make the mistake of correlating close scores with a well-played match. I put out this critique not to cast “shade” on either team. There are great players and coaches on both sides of the net. It was just one of those nights that both teams struggled to put good plays together. As coaches, we’ve all been there! Both teams displayed a lot of heart and played a thoroughly entertaining match.

I have to shout out to Lex Rodriguez, Kennedi Orr, Devyn Robinson, Sidney Hilley, Lexi Sun, Lindsay Krause, Nicklin Hames, and Maddie Kubik. All were part of the USA U-18 teams that played at the FIVB World Championships. Sidney and Lexi were on the silver medal team in 2015, while Lex, Kennedi, Devyn, Lindsay were on the gold medal team in 2019. Their success continues!