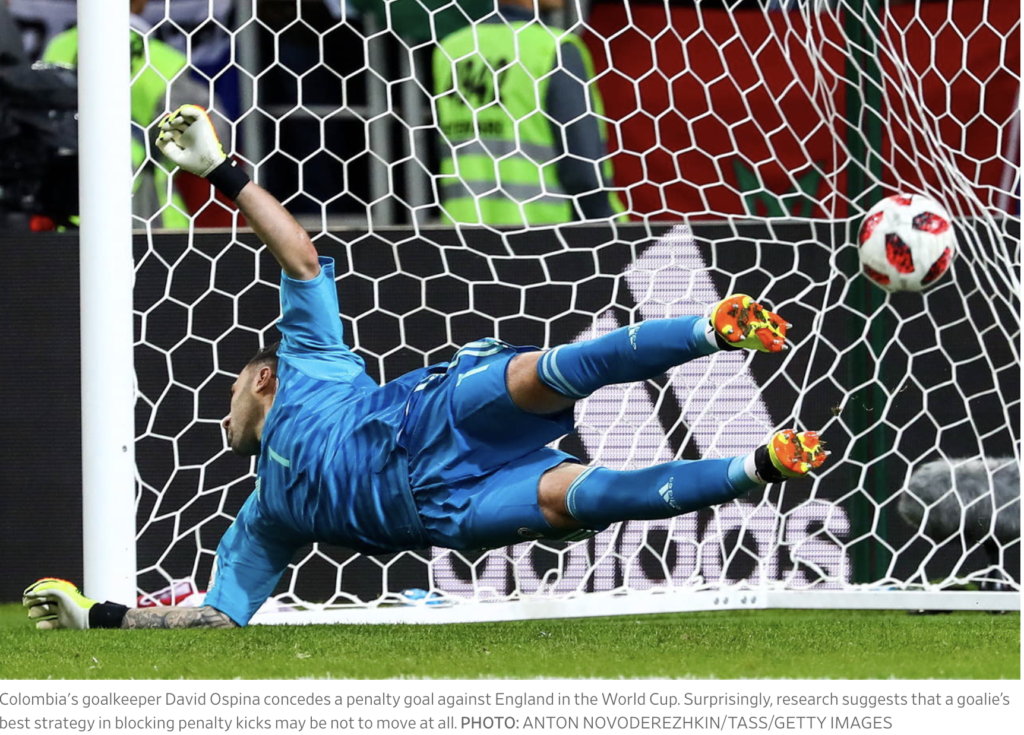 In soccer, when executing a penalty kick, the ball is placed eleven meters from the goal line and centered on the goal. The goalie must stay on the goal line but may move left or right to defend the goal. There are no other defenders in the goal area. A penalty kick is the ultimate 1 vs. 1 scenario. In a 2007 study published in the Journal of Economic Psychology, Michael Bar-Eli of Israel’s Ben-Gurion University and colleagues examined almost 300 penalty kicks taken against goalies in professional competitions.

So why don’t they? The answer is simple, and it has implications for all kinds of work, including jobs far from the soccer pitch. The problem is that we have an action bias: We would rather be seen doing something than doing nothing. As the saying goes, “When the going gets tough, the tough get going.” This idea is so deeply ingrained that we are afraid to give the appearance of doing nothing, even when it is the best strategy.

As coaches and human beings, we are all casualties of various biases. Generally, coaches are the living illustration of action and outcome biases. We tend to base decisions on outcomes, then spring into action with a swift resolution. We will change lineups, roles, tactics with the hope of impacting future results in a positive way.

To quantify the tendency of coaches to be quick to make decisions based upon outcomes, BYU Professors Lars Lefgren, Brennan Platt, and Joseph Price examined how professional basketball coaches adjusted their strategy after close wins as opposed to close losses. With a close game that finishes in a win or a loss, the coach has similar information: the team was roughly equal to its opponents. But the researchers found that coaches were much more likely after a loss than after a win to change the starting lineup in the next game. Results were valid even when the team was expected to lose a game or when the loss resulted from factors outside the team’s control.

Last week I watched a fantastic match that pitted the women’s volleyball teams from Purdue and Minnesota. This was a closely fought match that went five sets. Both teams played excellent for this early in the competitive season. The difference in the match was Minnesota outside hitter Stephanie Samedy. The right-side attacker had 28 kills and 4 blocks in the five-set match. By herself, Samedy scored 30 points, while hitting at a 37% efficiency. If you look a little closer at the analytics, you will find that Samedy is hitting 23% for the current season. Looking at the 2019 season, Samedy had an attack efficiency of 23%. Unfortunately for Purdue, she went off for high numbers on this particular night. Is this an indicator of future performance for Samedy? Who can predict? I’m sure Minnesota fans are hopeful.