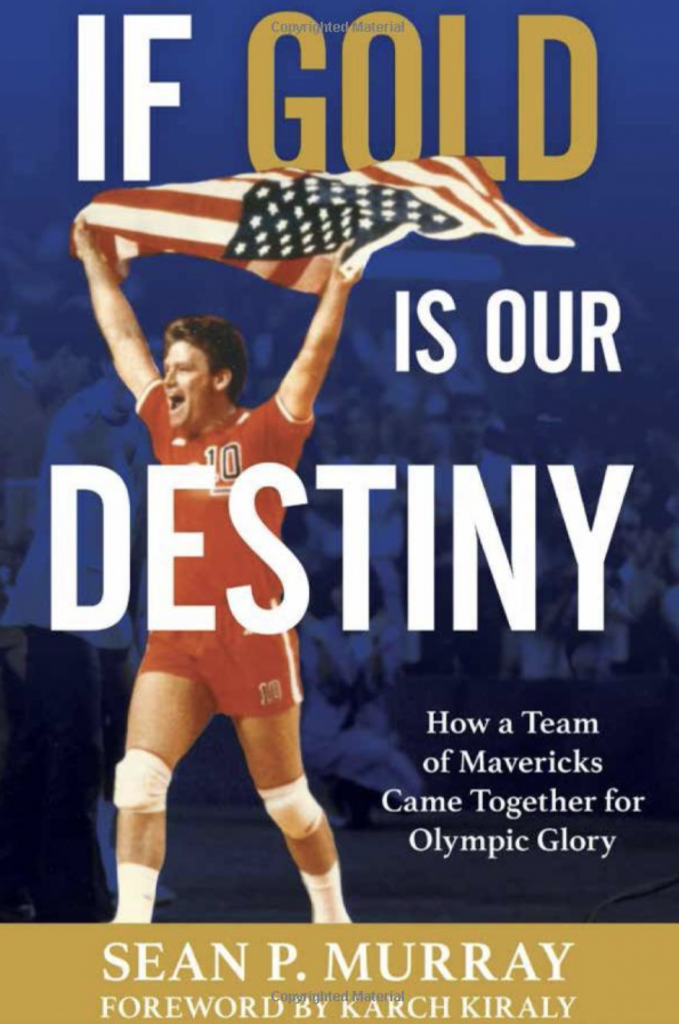 In 1981, the USA Men’s National Team was the 19th-ranked team in the world. In three short years, this team would represent the USA in the Los Angeles Olympics. In his book, “If Gold is Our Destiny,” author Sean Murray chronicles how the USA Men’s Volleyball team went from international “also-rans” to Olympic Gold Medal winners. Murray successfully combines a great coaching tutorial, superb storytelling, and a reflective study of how to herd divergent personalities into the best team in the world.

“A Sports Illustrated article accurately described volleyball as “just another American invention, like the assembly line, that the rest of the world was doing a little better.” The sport was dominated by Eastern European countries: East Germany, Bulgaria, the Soviet Union, Poland, Czechoslovakia, and Romania. Of the top seven teams that year, the only non–Eastern European country was Japan, which finished in third place.“

The trajectory to the gold medal was not a straight line upward. The hurdles were plentiful, with occasional landmines that challenged players and coaches on and off the court. Murray’s book is a phenomenal effort to contextualize how challenging the climb was to be the world’s best volleyball team.

The job of the team and coaching staff was to build a squad that would positively represent the USA and volleyball at the Los Angeles Olympics. Both the players and coaches knew there was work to do. Head Coach Doug Beal and assistants Bill Neville and Tony Crabb, along with consultants Don Murray (author Sean Murray’s father) and Chuck Johnson, took on this monumental task of blending highly talented but mercurial and independent thinking athletes into a cohesive team.

Historically, the USA men would assemble an all-star team, practice for a few weeks, head off to international competitions, and proceed to lose to the top teams. Coach Beal was a veteran of the USA men’s program as a player and coach. His experience told him that the program infrastructure needed a complete overhaul for the men’s program to compete with the top teams successfully.

Starting any project from ground zero is arduous, especially when attempting to transition from an all-star team model to a full-time, year-round training program. The fact that the full-time training would take place in Dayton, Ohio, was not a positive in the eyes of the players. Although not without positive attributes, Dayton is not the ideal location when most of the top players are from Southern California. Beal organized a program where players would work at a full-time job during the day, then train in the evenings.

The challenges were many:

“Marc Waldie, for instance, landed a job working for a storage company, picking up furniture and moving it all day long, then, after taking a bus to the end of the line, walked the final two miles home, sometimes in the snow. After a quick dinner with his wife, he would run out the door for a grueling three-and-a-half-hour practice, collapse in bed, and do it all again the next day.”

As Murray details the Dayton experiment, you must give the coaching staff and the initial group of courageous players kudos for getting this full-time program off the ground. Moving the full-time program to San Diego allowed the team to attract more of the top players. Although the zip code may have changed, the challenges of molding a group of individuals into a competitive team were nonstop.

Some of the challenges presented significant obstacles other challenges were somewhat unique.

As the final match in the Canada Cup was starting, Beal looked around and couldn’t locate starting hitter Pat Powers. That was because Beal wasn’t looking in a concession line that contained Powers waiting for a pre-match hot dog. Assistant Coach Bill Neville assumed correctly that he better take the lead on this one and joined Powers in the concession line.

“What are you going to get here?” Neville calmly inquired of Powers. “Oh, I’m going to get a Coke and a hotdog,” Powers responded. “I think you could also get a big tub of popcorn too.” “Oh no,” said the player. “I don’t want to be that full when I’m playing.” “You know, Pat, I don’t think you have to worry about that.” “Why do you say that?” Neville gestured to the team. “See over there. That’s your team. And they’re huddling right now. Now, you were in the starting lineup.” Neville’s voice became a little sharper. “And you would be going out on the court with them, but you’re here,” Neville said. “So I think you can get a big popcorn too if you want.” “Oh shit,” Powers replied, shaking his head with disappointment. Neville turned and walked away. Pat Powers stayed in line. He was hungry.”

From a coaching perspective, this book should be a bible in the importance of having a core coaching philosophy capable of withstanding constant challenges. Beal was unwavering and consistent in his philosophy on how he wanted to approach training and the commitment required of all involved.

Some players strongly desired to play beach volleyball (which Beal did not want), join a professional team overseas (which Beal was against) or were hesitant to commit to a full-time training program. Beal was steadfast in accepting the unceasing criticism and moving the program forward.

As the on-court skills progressed, the team became more competitive with the top teams in the world. But they weren’t yet to the promised land. The team still lacked the cohesiveness needed to win the big points in crucial situations. Too often, the team lost seemingly insurmountable leads and close sets due to mental breakdowns.

With the Olympics only months away, the staff developed the plan to take the team off the court and definitely out of their comfort zone in pursuit of developing the camaraderie needed to win a gold medal. Neville came up with the idea of doing an Outward Bound team-building excursion.

“Outward Bounds O’Neil eventually designed a course covering more than 100 miles of remote wilderness. The group would first ascend a snow-covered peak of nearly 11,000 feet, then move through pine forests before dropping into the labyrinthine pockets and canyons of Canyonlands National Park before arriving at their final destination, the famed Needles district of the park with its otherworldly Wingate Sandstone features. Depending on the weather and conditions, the natural beauty and ruggedness of the terrain could inspire awe or inflict misery.”

Murray chronicles the peaks and valleys, literally and figurately, in the experience. The personalities of both players and staff came to the forefront as the trip’s challenges were relentless. All parties, regardless of status, had to work together to achieve a goal. Sometimes the sole goal was to survive through the day.

The trip, combined with the training, and the year-round commitment to the team, molded an exceptionally talented group of individuals into a team that went on to win a Gold Medal at the Olympic Games.

Although Beal was the maestro of this symphony, the staff and athletes merit equal recognition. The players took on the challenges presented by Beal or the opposing teams, worked together, sacrificed mightily, conquered obstacles “du jour,” and accomplished a goal that forever changed the direction of volleyball in this country.

Sean Murray has done a fantastic job of chronicling the events, some the reader will remember instantly, some are definitely behind the scenes, that led to one of the most significant achievements in the history of USA Volleyball. Anybody involved in coaching should embrace this book as a first-rate tutorial. You’ll receive an in-depth course on system development, problem-solving, communication skills, and the importance of a rock-solid coaching philosophy. For non-coaches, this effort is a thoroughly entertaining adventure that will be an enjoyable read.