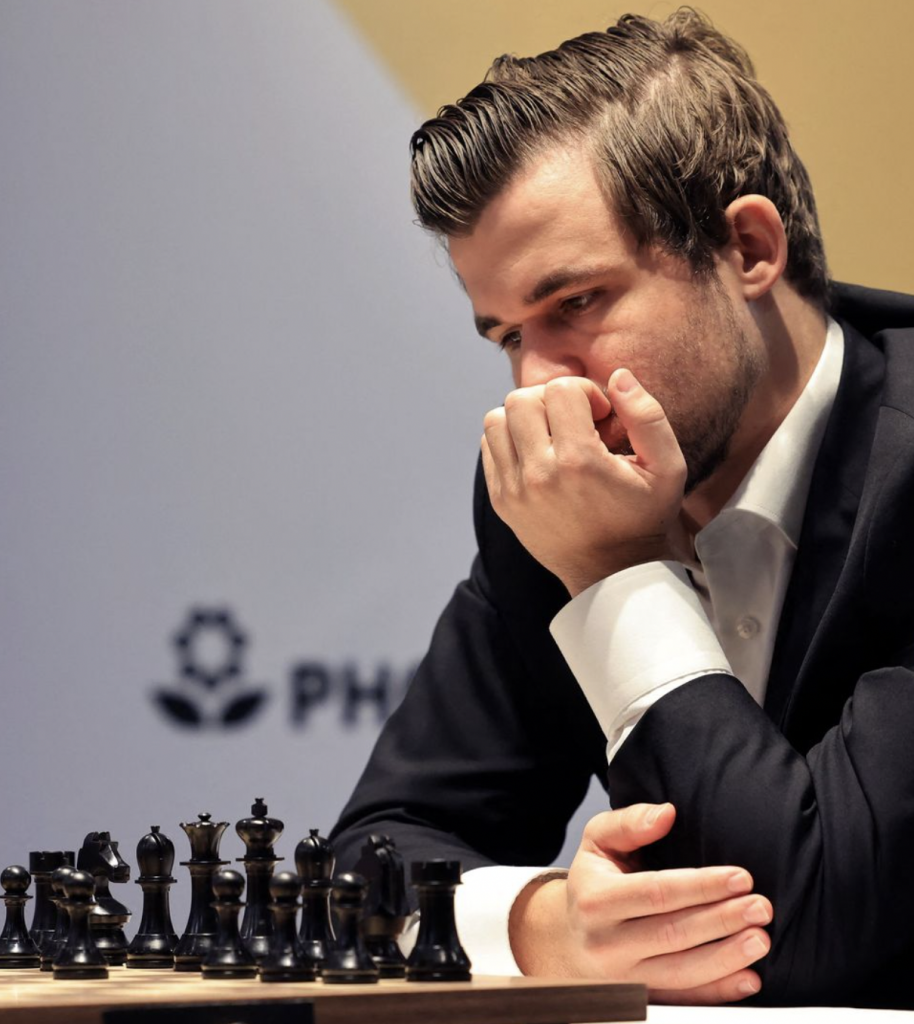 I was driving past a local business, and the sign out front said, “Change is good….you go first.” I wonder if numbers, data, and studies restrict our approach to the game at the expense of creativity and the ability to change from the script of accepted methods? There are a lot of game or practice plans that are fostered by the information being furnished by computer-driven data—the shot tendencies of attackers, set distribution, the type and the location of serves, etc. How hard would an opponent be to defend or attack if they departed from computer-identified tendencies?

I read an interesting article about World Champion chess player Magnus Carlsen. Like volleyball, the world of chess has been taken over by computers. Computer-driven information for the chess enthusiast is not just for the experts, “chess engines have become so widely available that even beginners have access to instant analysis tools that study positions 18 moves deep.” The top chess players train like boxers against computers to hone their skills to counteract or attack their opponent’s tendencies. However, Carlsen won the world championship by being creative in how he approached the game of chess. He used his instincts to create a non-traditional and unanticipated path to his victory. Simply put, he played like a human, not a computer. His opponent, Russia’s Ian Nepomniachtchi, was not prepared for the unpredictable moves that neither he nor the computer anticipated.

While watching collegiate volleyball matches, I observe assistant coaches dutifully calling out blocking schemes to defend the shot tendencies of the opponent’s attackers in each rotation. Undoubtedly, there is a considerable investment of time and study on the computer to arrive at the plan. It is also an indicator of how predictable offenses have become, both from a team and individual perspective. It is no longer a question of what the opponent will do. It is a question of your team being sufficiently talented to counteract the opponent.

A team with the best players can afford to be predictable. The onus is on the opponent to stop their attack. How might a coach become less predictable in their attack to increase the ability to compete against top competition successfully? No strategy will turn a bad player into a good player. So, to compete with good teams, you still need good players. However, by playing the game with some level of unpredictability, you might increase the chances of competing successfully with the best teams.

Like Carlsen’s chess victory, diversity of play is a good start. Briefly focus on a coach from a different sport. I was a fan of Chip Kelly when he coached the University of Oregon football team. He won with speed and players possessing a broad array of skills that facilitated an offense that proved difficult to defend.

While at Oregon, Chip Kelly walked, perhaps better put, sprinted to a different approach to his offensive system. Kelly recruited players with speed as a priority. A second priority was flexibility in their abilities that allowed them to play multiple positions and perform a variety of skills. He wanted running backs that could catch passes, valued wide receivers that could block, and quarterbacks that could run. By approaching the game in this manner, he created a lot of flexibility in implementing his offense. The more skills his players possessed, the more offensive options were available in the playbook. By default, his team became harder to defend because the defense had to focus on multiple offensive threats. Kelly’s approach didn’t work professionally, but now he is back in his element as a collegiate coach at UCLA.

What does this have to do with our sport? Volleyball coaches have fallen prey to overspecialization and a very uncompromising approach to training. Players are placed into rigid and fixed positions with limited responsibilities on the court. Most players are assigned to play one position, hit one set, etc. However, this approach limits your system choices and makes your strategy much easier to predict, therefore, easier to defend.

What might volleyball coaches learn from Kelly’s approach? Can you train your outside hitters to attack in the middle of the court? Conversely, move your middle hitters to attack from the outside? Can you receive with more than three passers? Remember the days of a five-person reception pattern where all the players would pass and attack different net areas. How about setters that are offensive weapons? Check out the brief video below of Serbian setter Maja Ognjenovic. To go with her excellent setting, she puts pressure on the defense to defend her attacks. Do you think a coach taught her the variety of attacks, or did she come up with these weapons on her own?

How about keeping primary point scorers on the floor in the backrow, which facilitates an offense with more attackers than blockers? How about players that master a multitude of shots to put more offensive pressure on the defense? From a defensive perspective, can you incorporate multiple defenses based on a situation or take a risk with your block to focus on a specific attacker?

I wonder if coaches at all levels are becoming “brainwashed” into approaching the game with the mindset of only one way to practice or play? Several years ago, I watched Japan at the Grand Prix tournament (now the Nations League). Japan’s 5’3″ setter Yoshie Takeshita was a setting maestro as she was carving up the block and defense of an unfortunate opponent. I caught myself thinking that as talented Takeshita is, she would probably not be a front-row player in the American collegiate system. The groupthink playbook would dictate “too small, and must come out in the front row.” Yet, here she was, beating the best teams in the world with the offense she administered.

It does take a level of courage to be creative in how one chooses to design their practice or systems. The essence of creativity is there is no guarantee of success. For example, how did Kelly Sheffield, head coach at Wisconsin, develop the idea of inserting Jade Demps in the backrow as a primary attack option? A backrow sub to provide offense? A definite prerequisite was some out-of-the-box thinking by the Wisconsin staff, combined with the creativity and curiosity as to how they might improve their offensive output. I watched many Wisconsin matches, and the success of this experiment was not immediate. However, it proved to be instrumental in Wisconsin winning a national championship.

I applaud coaches who put in the mental exercise to pursue a better or more efficient practice routine. Playing endless “wash” games can’t be the only way to pursue a goal. How can better feedback be provided to the players? How can the coaches help players better assimilate new concepts of skill development? Perhaps a review of the physical training program is in order. As I read the autobiography of the very successful, former Russian Olympic coach Nickolay Karpol, he was not a fan of lifting weights. His focus was bodyweight exercises, tumbling, running up hills, etc. I can’t say if this approach has merit, but it certainly would pique my curiosity.

I encourage coaches to be creative thinkers in their game and team development approach. A groupthink path to practice or system design eliminates the creativity that might win you a national championship.