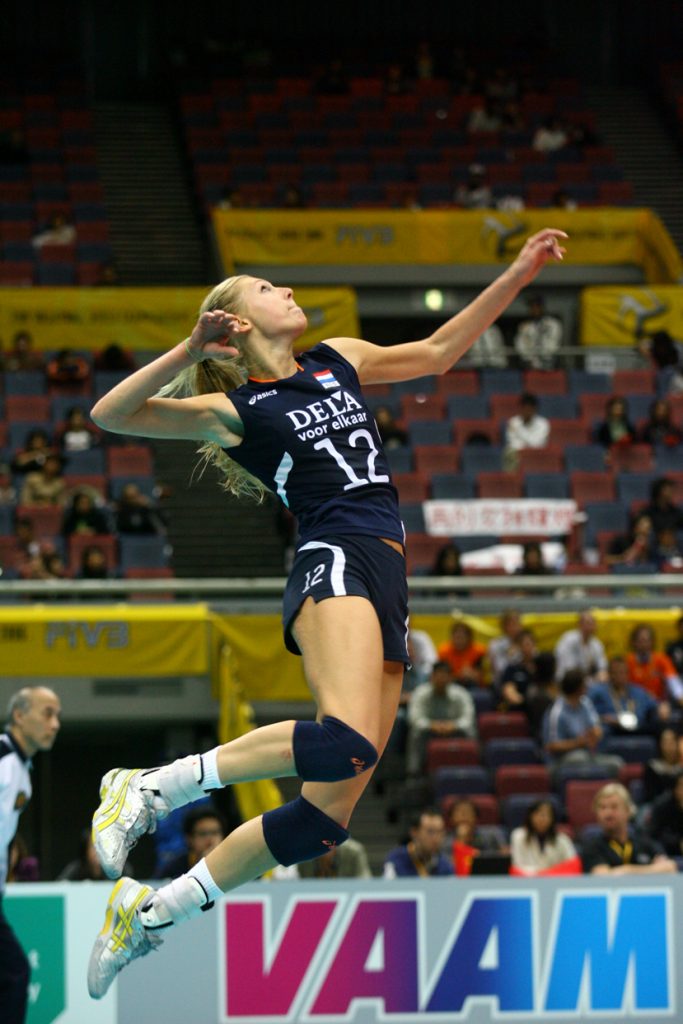 In my earlier coaching days, I would spend hours on a box in practice, hitting balls at players to work on their defensive skills. In retrospect, I was spending time in the wrong area of the game. Investing time in defense is not without value. A good defensive team demands the desired qualities of heart, determination, and skill. Defending the opponent’s attack will also keep them from scoring; also not unimportant. But, the key to winning is the ability to kill the ball.

In the last two NCAA championship matches for women, the participating teams averaged around 15 kills/set. There were about 1.5 blocks/set for three of the four teams (Wisconsin was an outlier with about 4 blocks/set), and all the teams had about 1.5-2.0 aces/set. Good teams will generally make about 6-7 errors per set. These numbers reflect the numbers accrued at most matches with skilled teams. The math indicates that if my team scores 15 points/set via attack, combined with two aces, two blocks, and the opponent gives me 7-8 points, I’m at 25 points. Sounds easy!

A winning team will score more points via attack than any other skill. Consequently, to win against a quality opponent, you need to be an accomplished offensive team. If you cannot kill the ball, you will rely on the opponent making errors to keep you in the match. For example, if you can only accrue ten kills per set, you’ll need to score more points via the block or service aces. That may not be possible. The final strategy is the hope that the other side makes a bunch of errors to help us get to twenty-five points. Good luck with that strategy! The better teams do not make a lot of unforced errors. That’s why they are a better team!

To be an accomplished offensive team, in rough numbers, you need to devote about 60% of practice time to the various aspects of the attack, including approach angles, timing, transition footwork, developing different shots, attacking the edges of the block, visual cues, and system development. Obviously, the abilities of the setter are part of this development of attacking skills.

Too often, teams approach their training by spending time working their way through the various skills as if the skills are weighted equally. There is a hierarchy of skills that practice time should reflect. Since attacking scores the most points in matches, it should receive the most attention in training sessions. Focusing on attacking and your offensive system development does not mean that other game areas are ignored. But, you need to make sure you’re working on offense daily.

Blocking won’t score many points directly; however, it is the cornerstone of your defense. At the higher levels of play, the opponent’s offensive abilities mandate that blocking be a priority. Taking away the best shot of an attacker, getting a controlled touch, or channeling the attack to the best defender all might result in an opportunity to kill the ball. Defensive skills are necessary because the opponent is prevented from scoring. However, a good defensive play is only half the battle. The dig must result in an opportunity to kill the ball. Lastly, serving has an essential role due to the potential of impacting the opponent’s sideout offense. You work on these other aspects of the game while developing your offensive capabilities. You work on blocking, defense, and serving while developing your offense. Bettering your offense will force your blocking, defense, and serving to improve. So, you want to become a better defensive team? Then work on your offense!

If killing the ball is essential to winning, what are the components of a good offensive team or attacker? First, from the individual attacker’s perspective, you want an aggressively thoughtful attacker capable of dealing with various scenarios. Below is a hierarchy of actions to be mastered. These are in descending order of priority:

Too many attackers go from kill to error without consideration for other options. The more attack errors a team makes, the number of kills the opponent needs to win is reduced. In defense of error-prone attackers that infiltrate lineups, these attack options need to be rehearsed. Spend time practicing recycling skills, putting the ball to a setter, getting the opponent’s best hitter on the floor covering a tip, etc.

Many will be concerned that there will be potential for fatigue or injury focusing on attack and the associated number of jumps. There is a degree of merit to this concern. We all want to keep our players healthy. I do have a couple of thoughts in this regard:

A skilled attacking team can offset weaknesses in other aspects of their skillset. As you plan your practices, make sure you spend a lot of time in the area that will score you the most points.