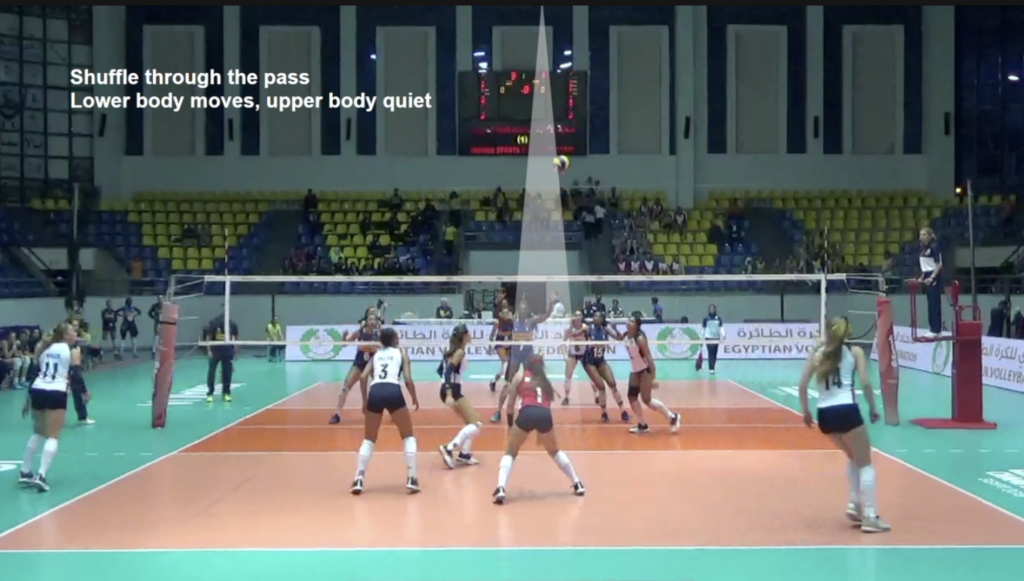 Volleyball is a game of movement. Players move in order to move again. We aren’t playing darts or chess; we play a sport where six players need to effectively cover 840 square feet and keep the ball from hitting the floor on their half of the net. At times, especially in serve-receive, three players are tasked with covering the court. The ability to maneuver on the court also impacts position-specific demands such as attack approaches, setter moving to an errant pass, running down a ball on defense, etc. To a large degree, a player is considered a good player or a bad player based on how well they move.

Given the relative importance of movement abilities, how much time is spent inside a training session teaching players to move correctly and efficiently? Or, do coaches assume that players will acquire the needed movement skills if they play enough? If a coach would ask a player for three essential components to good running form, what might be the reply? Anyone? Anyone?

Before a player can execute any skill correctly, they need to know the components of correct execution. As crucial as movement skills are, moving on the court is not the only motor skill that has value.

Please take a moment and look at some of the various movements required in our sport.

Running– (forward or backward) certainly running to the ball on defense, a setter running out of serve receive, the attack approach has a running component, running to block, running to defense after serving, etc.
Shuffle step– (forward, backward, lateral) a player will shuffle step to get to the ball on serve receive and defense, shuffle step when blocking, shuffle step for the setter as they move to the ball, etc.
Crossover step– a combination of running and shuffle step moves. It is used when blocking, transition hitting approaches, and defensive or serve-receive movements.
Stopping– after a player moves, they must have the ability to stop in a balanced posture that allows for effective execution of a skill.
Throwing– the overhead serve and the attack requires correct throwing mechanics. Proper throwing mechanics will allow increased velocity when attacking or serving, along with reducing the chance of injury.
Jumping– the ability to jump correctly is critical in the attack, block, and possibly the serve. Younger players are challenged to coordinate their upper and lower bodies and the proper use of the arms to assist in the jump.
Movement in the Air– once in the air, the players must execute dynamic body motions without losing balance or technical form.
Landing– Once in the air, you need to come down! Landing on balance will prevent unnecessary injury. Coaches do not spend sufficient time teaching players good landing skills.
Postures– the game is played in a variety of postures. The ability to master these situational postures will allow better skill execution and body balance.

All of the above actions are the foundation of proper skill instruction. I explore all of these in my book, “A Game Plan for Better Practices.” In the book, we present the movement skills of the game and ideas for training.

I hope the importance of movement skills, both on the ground and in the air, are acknowledged. For this article, I want to bring forward some concepts that I advocate when working with younger players.

First, it is easier to move if you’re already moving. I hear coaches all the time asking their players to be “stopped on defense.” It’s my opinion that being stopped is overemphasized. You want to be balanced, weight on your toes, with your feet on the floor as the ball is being attacked. If you look at top defenders in volleyball, they are loading their muscles in anticipation of moving to the ball.

In the video below, you’ll see Hall of Fame tennis player Steffi Graf in a practice session. You’ll notice her feet are constantly moving. You should also notice the slight hop as she prepares for the next move. The hop will load her muscles in preparation to make a dynamic move to the ball.

Second, the slight loading hop that Graf was executing in preparation for the groundstroke is an example of the “stretch-reflex” that is essential to any dynamic movement. The video below will provide additional information on this vital component of moving and jumping. If you want players to move quickly, there should be loading or stretching of the muscle, so the subsequent contraction is fast and with force.

How can volleyball coaches incorporate stretch-reflex into their instruction? Certainly on defense by taking a slight hop in advance of the attack. Some coaches will have their middle blocker perform a hop or “split-step” as the ball is set to load their legs for a dynamic lateral move or a quick jump to defend the quick attack. Another example of the stretch-reflex is the last two steps of the attack approach. If executed correctly, the last two steps of the attack approach should be long and fast to load the muscles for the jump.

In the following video, you’ll see some outstanding defenders at the U-18 World Championships initiating a loading action with their legs in preparation to defend an attack.

Third, players must be comfortable playing the ball while they are in motion- the main issue with many young players is they want to make all the moves with the upper body while keeping the lower body and foot movement to a minimum. It should be the exact opposite. The upper body remains quiet while the lower body moves. Notice in the video below, the passer keeps moving while executing the forearm pass while the head and upper body remain quiet. The court is too big, with the ball coming too fast to get stopped in advance of each contact. Building comfort with moving while passing or defending is essential to increasing court coverage.

A wise coach invests the time teaching their players to move, throw, jump, and land properly. The first investment of time must come from the coach to acquire the expertise in the key aspects of developing motor skills for the young athlete. I would say that with younger age players, many of the on-court errors are a result of not moving their feet. I would also say that poor throwing mechanics are at the root cause of many attackers having sore shoulders. I encourage coaches, especially those coaches working with young athletes, to spend some time in practice developing the essential motor skills. The result of this investment will be increased court coverage, better skill execution, and a reduction of injuries.