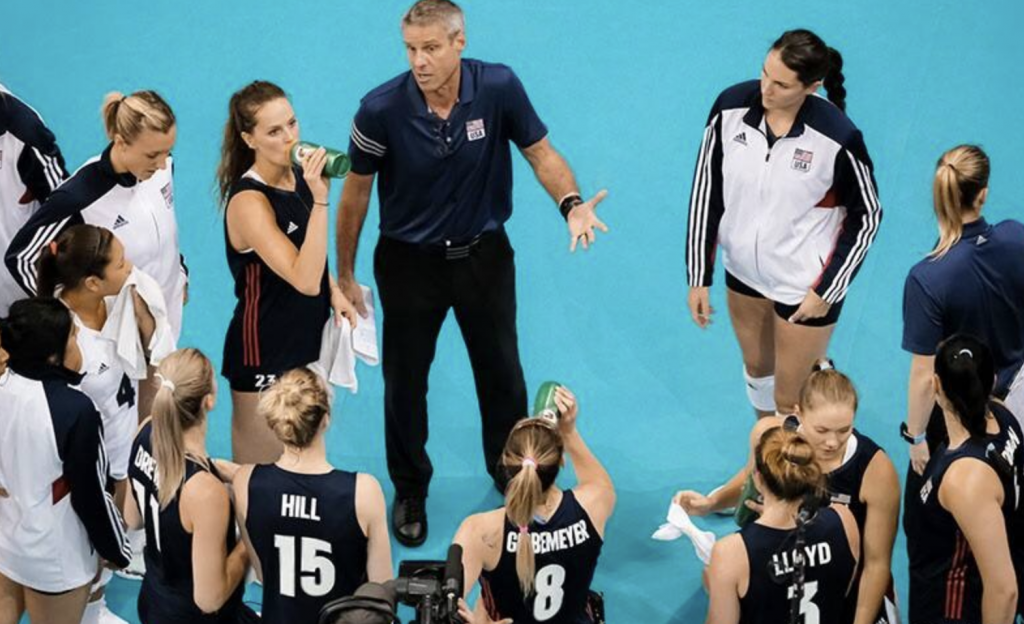 I loved the timeout format for international matches. You have thirty seconds for the players to get a drink, for the coach to make a quick comment, then the troops return to the competitive fray. In this country, the length of timeouts will vary, but certainly more than 30 seconds. In some televised matches, the coaches have time to discuss volleyball, world events, and climate change and still have time left over for their team. The question becomes when to call a timeout and how to use the available time most efficiently.

There is a tendency for coaches to call timeouts only when the opponent has put together a string of points. This tendency is to the point that when a coach calls a timeout, the players assume they are performing poorly. The thought of using timeouts to stop the point-scoring momentum of an opponent is probably overplayed. It is not unusual for coaches to reward themselves if they call a timeout, and upon resuming play, the opponent makes a serve error. A coach might remember these occurrences, but I’m reasonably confident that a team’s rate of serving errors will remain constant with or without a timeout being called. Similarly, a team’s historical side-out or point-scoring efficiencies will probably not change based on when a timeout is called.

I consider timeouts to have two purposes. First and most important is using the allotted time as a teaching moment. The coach sees something performed well on the court that has been emphasized in practice and feels that positive feedback is warranted. Those moments can happen at any point in a set. I remember calling a timeout at 4-3 of the first set to reward the team for their excellent hitter coverage, which had been a priority in the previous practices. The second purpose can be to impart offensive or defensive strategies based on how the set unfolds and your opponent’s strategies. Again, there is no rule for when you might want to relay essential information to your players. This scenario might occur early or late in a set without regard to which team is serving.

There is no single format to use the available time efficiently. Some coaches will have the on-court players gather with their positional teammates to exchange information. Using time in this fashion does have positives. There is potential to keep non-starters engaged in the game by allowing them to point out some keys that may have value. This value would depend on the age and experience of the teammates on the bench.

The timeout allows the players to absorb information and take a quick breather. I’ve always been intrigued by coaches gathering as staff for most of the allotted time to discuss what is taking place on the court. I would prefer if an assistant coach has an observation, they let the head coach know in advance of the timeout. At times, I will make a written note if I want to ensure that a specific point is mentioned.

My general timeout routine is to give the players the first 15 seconds of a timeout to rehydrate. I have teammates assigned to bring water to those coming off the court. If I need to speak with an individual player, I will do this during this time. Since the setter touches the ball the most, they have the most potential to impact the game. Often my conversations will be with that player to discuss set distribution, attacking a specific area of the net, or a weak blocker.

If I need to speak with the entire team, I will do so in the final thirty seconds of the timeout. I try to keep the information brief with two or three informational bullet points. I avoid too much information. Just focus on the important stuff. If the opponent calls the timeout and we are serving, I have an assistant review the opponent’s rotation and potential offensive options coming out of the timeout.

Regardless of the score, I try to ensure the timeout atmosphere is optimistic, with the primary focus being winning the next point. If my team is ahead, point out items to focus upon that we’ve been practicing. If we are behind, encourage the team to keep fighting to close the gap.

I’ve always been intrigued with the prospect of using video during a timeout to point out specific items for players. There is enormous potential in using video clips to point out how to attack or defend an opponent. When watching NFL games, you’ll see quarterbacks using video to assess the defense and plan the upcoming series of plays. Although numerous software programs are available for this purpose, the one I’m most familiar with is Dartfish, which does an excellent job of live tagging matches.

When properly used, timeouts can be excellent teaching moments as the feedback you provide is immediate and specific. Ensure the content you provide is substantial, specific, and contains an action plan for implementation.