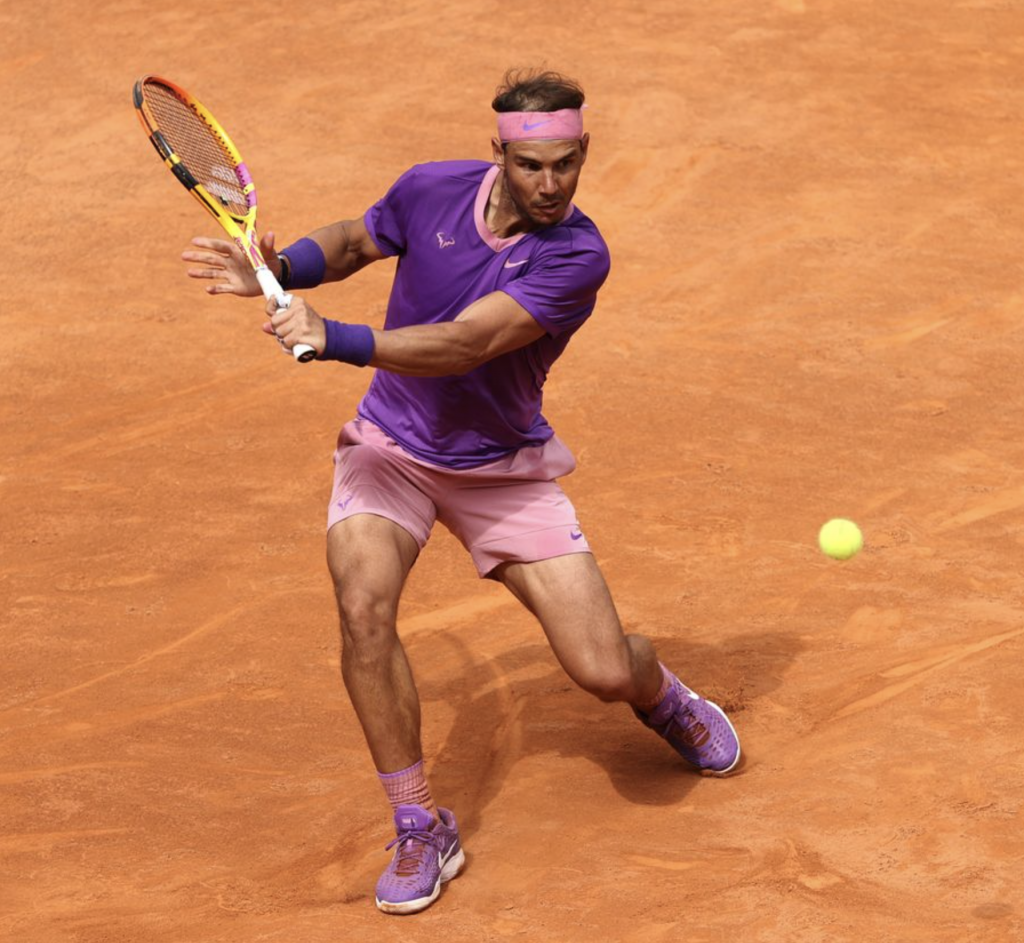 Very few would debate the importance of repetition in the process of learning a skill. However, repetition in and by itself is not the key. The nature of the repetition is relevant to the learning process. Mindless repetition does not foster improvement. Repetition without thought merely confuses activity with getting something accomplished.

The video below shows superstar tennis player Rafael Nadal in a training session. As you view the video, you’ll see lots of repetition of a forehand groundstroke. If a rally ends, another ball is entered by a coach. Neither player is attempting to score. The focus is working on the forehand groundstroke. So, in a short duration, Nadal will hit seemingly a hundred forehands. Is this type of repetition a wise use of time?

Coaches are familiar with the terms “blocked” vs. “random” training. A quick definition of blocked training might be repeating the same skill with only slight variation. The Nadal video demonstrates an example of blocked training. In contrast, random training provides variation in the skills by not sequentially repeating the same skill. Placing the same Nadal drill into a more random environment would have players attempting to score by hitting different shots and moving their opponent around the court.

Many coaches have been indoctrinated to the belief that all blocked training is a borderline waste of time. The game is random; therefore, when teaching skills, all activities must be game-like and random in nature. Any activity not of this nature is not a wise use of time. Volleyball coaches from this doctrine believe the ball must be coming over the net; we must receive from a live server; there is never a role for the coach to enter balls, etc. Unfortunately, many times the randomness of a drill does not allow the individual repetition necessary for improvement.

Much of the current literature indicates more lasting retention and skill development occurs in a drill that is more random in nature. Although progress may be slower in a random drill environment, the skill development and retention rate are generally greater. Therefore, the blocked environment that Nadal was working in should be discouraged? Right? Not so fast!

There is another aspect of the learning process that is often ignored but critical. My best guess was when Nadal worked on his forehand in a blocked environment; he was not mindlessly hitting forehands. Perhaps there was a technical aspect of the groundstroke that had his focus. Or, placing more topspin on the attack, or maybe a more consistent contact. Regardless of the specific focus, I’m making the assumption; there was a focus.

Thus enters the third actor in this drama—the concept of deliberate practice.

These four items are essential components of deliberate practice.

The practice must be intentional, with the athlete being fixated on specific aspects of a skill or team system development. This requires the coach and athlete to collaborate on the important components of skill and work tirelessly to perfect each of the components. Using the spike attack as an example, consider all the moving body parts to correctly attack the ball. Throw in the variable of hitting a ball that is moving. There needs to be a focus on the components of the approach, the jump, the armswing, and the landing. With each attempt, the attacker should be focusing on a specific aspect of the skill.

There must be 100% effort and concentration. For significant improvement to occur, the athlete needs to have a tremendous focus on the task.

The timing and quality of the feedback are critical. The feedback should be immediate and contain relevant information. This requires the coach have expertise in the various components of the game and the ability to communicate these components to the athlete.

If a training session lacks these four ingredients of deliberate practice, it doesn’t matter if a coach implements blocked or random activities. The skill development of the athlete will be marginalized. Too many coaches feel the random activity is the key to improvement. The ball is rolled out and the players play in a very unfocused fashion. What is not understood is the activity is merely a tool. The coach must instill an atmosphere where the players give excellent effort; the athlete has a laser focus on skill improvement; the feedback is of the highest quality; the player will apply the feedback for continuous improvement.

World-class violinist, Itzah Perlman, talks about how one might approach the learning process when working on a new instrumental piece.

The Nadal video demonstrated a specific focus on the forehand groundstroke. He worked on the stroke in a focused and meticulous fashion, as recommended by Itzhak Perlman. Without question, even though being a blocked activity in nature, this type of drill has value inside a training session. Since activities that are somewhat random in nature have proven to encourage greater retention, random activities should be a significant aspect of the training session. So, how to balance random activities with the necessary repetition needed for improvement? The simple fact is that in a 6v6 activity, players may go through the drill with minimal attempts at serve-receive, attack, or defending an attack.

What I encourage coaches to consider are activities that are controlled random in nature. In essence, you script who serves, which passer that is targeted, where the set goes, etc. Here is an example of a controlled random drill.

What are the benefits of this type of drill? First, there is repetition in specific areas of the game. The server gets multiple opportunities to serve to zone 5 (LF passer); the LF receives passing reps, then attacking the first set; the RF and MF blockers get to practice moving to block the LF attack; the LB gets practice defending the cross-court shot, etc. Second, even though there is a script to the activity, there is still randomness. The server can serve short or deep, the attacker can hit any shot in the effort to score, etc. Third, players are receiving sufficient repetition that provides the opportunity to improve. This simple drill could be modified to meet the needs of the team. Perhaps a different serving zone, change the first attack, etc. The only limitation is the imagination of the coach in designing the activity. The feedback can come from the coach, but perhaps more important, the feedback comes from what the result is from the action on the court. If the ball is passed perfect each time, the server needs to improve. If the attacker has trouble scoring, perhaps they need to develop a greater variety of shots, etc.

As coaches plan their training, I would encourage the focus to be on implementing the concepts of deliberate practice, regardless of the activity being blocked or random. Merely supplying an activity does not necessarily promote improvement.